Today, with distributed connectivity across many devices, we are steadily migrating toward a world of unbelievably massive expansiveness and abundance. One study done in the third quarter of 2016 highlighted that the burgeoning acceptance of mobility, cloud, and IoT, has hugely escalated the number of new machine-to-machine (M2M) connections in comparison to the number of phones and tablets that were added to the network. It predicted that the number of connected devices on the Internet would exceed 50 billion by 2020 and one trillion networked sensors will be embedded in the world by 2022. The steady influx in consumption of cloud services and cloud-native applications, escalating mobile devices, and ever-increasing non-traditional IoT devices are mounting unprecedented pressure on the network—the central element connecting all the units of Cloud, IoT, Mobility, Security together. In this scenario, an entirely revamped enterprise network which is simpler and capable of efficiently containing the mounting pressure will draw the differentiating line between a business’s digital success and its displacement from the competition. It is in such an era, when the network has never been more critical to success, that Cisco, a name synonymous with enterprise networking, unveils its intent-based networking solution–The Network Intuitive. This neoteric network system runs on human-alike intent, context, intuition, and is firmly poised to be a significant breakthrough in the realm of enterprise networking. Guided by artificial intelligence and machine learning, The Network Intuitive has been crafted to be able to translate business intent into action, by automatically generating policies or fixing problems without human intervention.

Enterprise network, as transparent as it often appears, forms the sole unifying element and the engine for innovation that brings together all the disruptions in an organization. It acutely helps a business’ entire executive team improve workforce engagement, create newer business models, and transform customer experiences. However, the traditional box-by-box approach of managing network operations does not, currently, stand sustainable owing to myriad reasons. Although in an organization, the network serves as the central point where the entire breadth and depth of business and IT intelligence can be gathered, massive volumes of beneficial insights still remain untapped. This intense dearth of requisite business and IT insights questions the eminence of the present data-driven economy. In addition to being complex and dependent on slow, error-prone manual operations, present enterprise networks also continue to be vulnerable to unanticipated and devastating cyber-attacks, like that from the WannaCry ransom-ware. Security concerns are even higher in Asia-Pacific where networks are comparatively less advanced, and attacks are on the rise, more than anywhere else.

The Network Intuitive, powered by intent and informed by context, contributes three elementary differentiators to Cisco’s forte–intent, context, and intuition

The answer to mitigating all these critical issues lies in a smart network that constantly evolves itself to meet emerging business requirements, and autonomously performs continuous monitoring of potential issues, whether they are user or security related. And, Cisco’s Network Intuitive effectively optimizes network operations and safeguards them in today's evolving threat landscape, by constantly learning, adapting, automating, and protecting the network. The Network Intuitive can spot threats, even those within encrypted traffic, and create a protective umbrella based on what it deciphers from every attack. Therefore, the more it’s attempted to be hacked, the smarter it becomes. This pioneering introduction is the culmination of Cisco's vision to create an intuitive system that will help businesses to unlock new opportunities and solve previously unsolvable challenges in an era of increasing connectivity and distributed technology.

The fact that Cisco has been responsible for moving 80 percent of the internet’s data for the last three decades puts the company in a unique position to be able to study and comprehend the fundamentals of network operations and security and apply that knowledge to build The Network Intuitive. Cisco’s continuous investment in software innovations, in-house designed programmable ASICs, and embedded end-to-end network security, substantially adds to the IT giant’s potential to re-imagine this new era of networking. 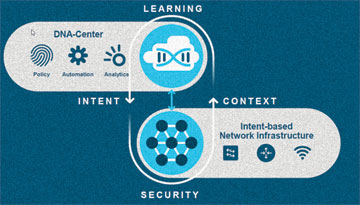 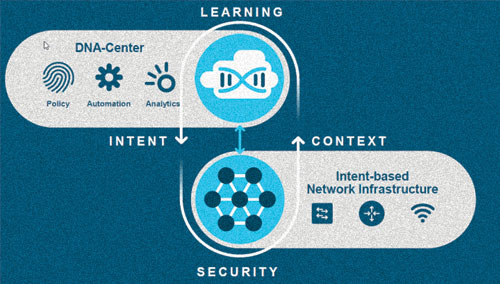 The Network Intuitive, powered by intent and informed by context, contributes three elementary differentiators to Cisco’s forte–intent, context, and intuition. With the advent of IoT and the proliferation of millions of devices, ‘intent’ makes it possible to diminish the traditional, time-consuming processes in favor of automation. The new network interprets data according to the right ‘context’—the who, what, when, where, and how—enabling companies to hasten operations, secure infrastructure, and tailor experiences to their customers’ needs. Cisco also exploits the vast amount of data that flows through its networks around the globe, with built-in machine learning, and unleashes that data to provide actionable, predictive insights. This is where ‘intuition’ comes into play. Brink Sanders, MD, Software and Network Transformation at Cisco in APJ, says that “What we have started is a huge transition to intent-based networking that eases tackling the escalating security risks due to rapid multiplication of IoT and mobile devices. We are providing scalability and security that meet organizations’ digital objectives.” As the network of the future has a more relevant role to play than it had in the last 30 years, The Network Intuitive “sees all the data” to translate business-intent into profitable action.
This next-generation networking system is built on Cisco’s Digital Network Architecture (DNA), comprising of many innovations, including Encrypted Traffic Analytics (ETA), programmable Catalyst 9000 Series switches, and DNA Center, to support the new paradigm of networking. ETA can identify threats in encrypted traffic without the use of decryption or deep packet inspection, allowing for simultaneous threat and privacy protection. With ETA, companies can identify malware even in encrypted traffic to ensure enterprise compliance with specific cryptographic protocols and detect vulnerabilities. It blends enhanced netflow, analytics, machine learning, and global-to-local knowledge correlation to deliver better visibility into potential threats using network analytics, along with faster response abilities through automated containment of infected devices and users. “This enables IT teams to detect threats accurately and reduces false positives, in a time and age where the majority of the internet traffic is in fact encrypted,” Sanders highlights. On the other hand, Cisco DNA comprises of Software-Defined Access (SD-Access), which leverages automated policy enforcement and network segmentation over a single network fabric to simplify network access for users, devices, and things and reduce the attack surface.

Currently, hundreds of leading enterprises and organizations across the globe have begun their journey with these next-generation networking solutions, including Deakin University, NASA, Royal Caribbean Cruises, Scentsy, UZ Leuven and Wipro. Of the 350 organizations from varied industry domains that are exploiting the expertise of The Network Intuitive, Sanders focuses attention on one particular instance wherein Cisco assisted Wipro, one of the largest IT Services Providers in the world, wholly renovate its networking architecture. With more than 800 offshore development centers hosting other companies’ networks around the globe, Wipro has a need of seamless automation for faster client on-boarding and enhanced agility, security and user experience. Modernizing the network had been a priority in order to simplify IT operations and leverage the best of a digital network. Wipro has been on transformation journey with Cisco’s Network Intuitive and has piloted and deployed Cisco DNA only to experience phenomenal outcomes—greater security, faster time-to-market, and improved user experience. By deploying SDA, Wipro has reportedly undergone superior level of speed and simplification—time to onboard clients has already reduced from months to days and that to deploy cloud services from hours to minutes.

The Network Intuitive is a quantum leap in the evolution of enterprise networking which mirrors Cisco's vision to create an intuitive system that anticipates actions, undermines security threats, and continues to evolve and learn. But given the fact that security threats will continue to evolve, Cisco plans to add new capabilities to bolster its defensive shields constantly. “With today’s difficult-to-manage multivendor and multiproduct environment, security tops the priority-chart for all companies we have talked to. Our intent-driven network is definitely the future,” states a confident Sanders. Gartner predicts that by 2020, ten percent of enterprises will use intent-driven network and the era of increasing connectivity and distributed technology is gearing up to embrace the future of networking–The Network Intuitive.

Description
For the next generation of business networking, Cisco has developed The Network Intuitive that is informed by context, powered by intent, and growing more intuitive each day