The 5g Container Ship: Loaded With Sliced Beams and Liferafts

By Mansoor Hanif, Director of Converged Networks and Innovation, BT 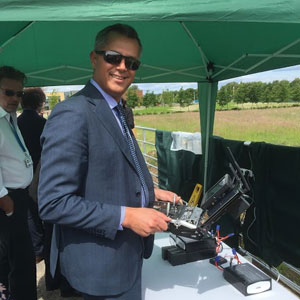 In most countries LTE-Advanced (LTE-A) can effectively handle traffic growth for the next 2-3 years and Gigabit-networks based on LTE-A are already commercial. But going beyond the gigabit peak-speed mark would be difficult, expensive and inefficient with LTE-A: this is where a smooth transition to 5G comes in. Standardisation of the 1st wave of 5G will complete next year and large-scale commercial networks will start to become available around 2019-2020. Some operators have plans to launch earlier, by providing residential Fixed-Wireless-Access (FWA) using the higher frequencies from 24-60GHz (millimetre-wave or mmWV) where more bandwidth is available. But these frequencies are easily blocked, even by tinted windows and it will be very difficult to achieve good-quality residential FWA coverage on a large scale without the use of external antennas which increase the deployment cost. However, mmWV allows dozens of smaller antennas to be integrated enabling new techniques such as dynamic beam-forming which are perfect for tracking moving devices and extending capacity and coverage along routes–this is particularly interesting for vehicles such as cars, trains, buses, ferries, drones or aeroplanes. So the transport industry is likely to be an early beneficiary of 5G technology. Maybe we will also finally cover the railway tunnels in the UK by bouncing these mmWVs along the inner tunnel walls.

“Network slicing opens up a variety of commercial opportunities based on federated slicing, either for verticals or horizontally across service providers”

5G will expand LTE-A networks into the next decade, increasing coverage, capacity, speed, performance and reactivity. These are an evolution of LTE-A, and are necessarily simply to meet the ever-increasing expectations of our existing customers. In extremely price-conscious and competitive markets such as the UK, meeting these expectations is essential, but could lead at best to a modest increase of revenues when these enhancements deliver a premium experience. So the other properties of 5G are those that hold the potential to add significant extra revenues and efficiencies: 5G must be flexible, programmable and ultra-reliable to meet the needs of any type of service. These are the transformational properties of 5G–and they must be delivered over a single platform to provide operational efficiencies.

The concept of “Network Slicing” is the most efficient way to achieve this. The process has already begun with the latest LTE-A network capabilities which allow network operators to offer and guarantee specific SLAs to different categories of customers over a network infrastructure which is shared with other customers.

Network slicing opens up a variety of commercial opportunities based on federated slicing, either for verticals or horizontally across service providers

The Emergency Services Network (ESN) which will be launched on the EE4G network next year is a good example. ESN can be considered as a guaranteed network slice with a specific SLA–however setting up this slice took several years and implementing any changes to the SLA would take many months. To be able to industrialise network slices and offer them at a large scale at short timescales to many varied customers is a primary goal of 5G.

This can only be achieved in a virtualized environment: 5G is the 1st mainstream mobile network generation which will be cloud-native. The implications for NFV and SDN technologies will be similar to that for IMS when it was finally adopted as the solution for 4G Voice. We can expect a concerted push on expanding and operationalizing NFV and SDN in the telecoms industry to 2020, especially in the use of Containers. Container-based technology has several advantages for 5G: the flexibility to dynamically move functions around the network between the edge, core and aggregation nodes, support for extremely fast session setup and reconfiguration required by dynamic network slicing and sufficient modularity and scalability to support the mass IoT requirements of 5G.

NFV and containers have not reached the point where many operations teams are comfortable deploying into large commercial networks but this is where today’s early focus on 5G will be beneficial: steady progress now and in the next few years should remove the remaining obstacles in time for the large-scale rollouts by 2020.

It is also increasingly clear that Network Slicing can inter work with and make full use of NFV and SDN. The NFV architecture optimises the underlying compute/ storage infrastructure, network slicing will manage the end-to-end resources which make use of the NFV infrastructure to provide a service and its related SLA. The resources optimised by Network Slicing are much more varied and diverse than those traditionally managed by NFV– they include various types of Radio resources, Backhaul, Core and even potentially fixed network resource such as Wi-Fi bandwidth.

Network slicing also opens up a variety of commercial opportunities based on federated slicing, either for verticals or horizontally across service providers. The details of how these network services will interface into vertical industries and enterprise networks are now the subject of much activity. There is a particular focus on to what degree the configuration and management of slices should be “open” to enterprise customers: while this is common practice in the world of business networking it is a revolutionary concept for mobile networks. The emerging trend is that of 3 broad types of slicing–Operator-Centric (focused on Carrier Network use cases), Customer-Centric (focused on Vertical and Enterprise use cases) and Developer-Centric (particularly relevant for Edge computing use cases open to 3rd party developers). Each of these types is likely to have a different degree of end user accessibility and configurability.

The advent of ambitious programmes such as ESN are cutting a path towards ultra-reliability in networks. This will be based on system engineering principles of multi-tiered and coordinated contingency, rather than trying to engineer exponentially costly network devices to 5*9s reliability. This multi-tiered, orchestrated contingency is being built deep into the 5G standard. The most frustrating moment any network engineer must face: having to say “no” to a potential customer asking for a requirement which cannot be delivered may disappear. A specific requirement on reliability, low-latency, guaranteed throughput or security will simply be just another element of an SLA which can be provisioned dynamically over an otherwise shared network infrastructure. The implication for vertical use cases is clear: people only build dedicated networks today because carrier networks cannot deliver what they need. The flexible, programmable and ultra-reliable 5G networks of tomorrow should never have to say “no”.

Know How to Sell Networking as a Service